DOES YOUR OATMEAL HAVE GLYPHOSATE

Should Your Oatmeal Come With A Warning Label? Is the oatmeal you love as healthy as you think it is?  Is it free from glyphosate and other herbicides or pesticides?

A trending topic over the past few days has been about oatmeal and oat products reported to contain alarming levels of glyphosate – a herbicide linked to cancer by California state scientists and the World Health Organization.  Glyphosate is the active ingredient in Roundup® a weed killer made by Monsanto that is the most heavily used herbicide by U.S. Farmers.

While we hate fear-mongering as much as the next guy, this story really hits home for us.  Both because we make our own Oatmeal and Oat-based products, and because many of us here at John’s Killer Protein® are ourselves consumers (and parents to young consumers) of the brands being reported on by CNN®, EWG® and the FDA.

What brought this to everyone’s attention was a historic court case that wrapped up last week, in which a California jury ordered Monsanto to pay $289 Million to a man dying from cancer. Because of the apparent link between glyphosate and cancer, and the overwhelming evidence presented and argued during this California court case, there was a renewed interest in testing products we consume that are made from grains and crops known to have exposure to glyphosate.

But First – The Good News!

At John’s Killer Protein®, we make two products that contain Oats.  Both are certified GMO Free and are made with certified organic oats grown, harvested and processed without the use of herbicides or pesticides. Both our Organic Oats – Complex Carb Blend® and our PROATS – Protein Fortified Organic Oats® have no detectable traces of herbicide, pesticide, and specifically not glyphosate.

As a matter of fact, none of our protein blends have traces of pesticides, chemicals, additives or any harmful ingredients.  That’s because we take our sourcing very seriously and pay close attention to the smallest of details.  Our vendor-partners are scrutinized and selected carefully.  We only source the highest quality and purest ingredients, and independently test each ingredient to ensure compliance with our high quality standards.

We do this to ensure that every product bearing the John’s Killer Protein® name is pure, clean, and free from unwanted contamination, harmful chemicals, additives, fillers or artificial ingredients.

The EWG tested more than a dozen brands of oat-based foods that we, as American consumers have become accustomed to eating with the presumption that they are safe.  EWG released their findings in a report on August 15, 2018 by Alexis Temkin, Ph.D, Toxicologist , and the results were alarming!

Below is a table that shows levels of glyphosate found in the brands and products tested by the EWG: How Big Is This Problem?

Each year, the EPA estimates that 250 million pounds (yes, Million!) of glyphosate is sprayed on crops by U.S. farmers.  These crops are almost always grown from genetically modified seeds, engineered by Monsanto to withstand the same herbicide Monsanto also makes.  The effect of this practice is that these GMO crops will survive while unwanted weeds and plants will not.  It’s actually quite an effective (and scalable) way to grow crops without unwanted weeds or plants – If it wasn’t for the cancer-causing health effects of spraying food with glyphosate!

Why Should You Care?

Once sprayed or used in pre-harvesting, glyphosate will stay in the food supply and make its way into the finished packaged product we pick up at the local store.

The highest levels, greater than 1,000 ppb (ppb stands for parts per billion – and that’s because trace elements of this chemical is all takes to cause health issues) were detected in two samples of Quaker® Old Fashioned Oats. Three samples of Cheerios® had glyphosate levels ranging from 470 ppb to 530 ppb.  Glyphosate was also detected at concentrations of 10 ppb to 30 ppb in five of 16 samples tested.  The five samples came from the two brands: Bob’s Red Mill® and Nature’s Path®.  This is concerning because these levels are found in household name products and are considered unhealthy by unbiased scientific and medical communities world-wide.

Brands With High Levels of Glyphosate 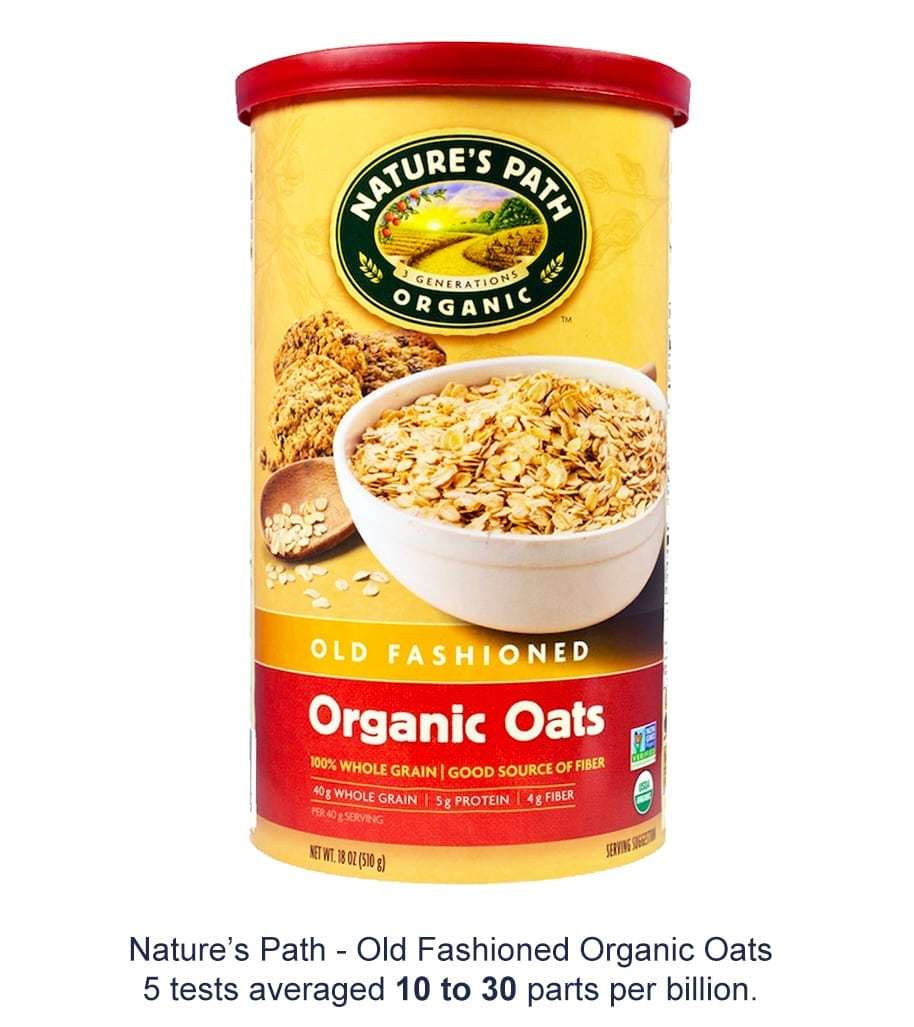 Two years ago, under pressure from the Government Accountability Office, the FDA began testing for glyphosate in a limited number of foods.  We suppose the FDA thought it’s better late than never!  At the 2016 North American Chemical Residue Workshop, an FDA scientist presented data showing that glyphosate has been detected in several oat-based food products.  After a Freedom of Information Act request by US Right to Know, earlier this year the FDA released documents that said the agency has found “a fair amount” of glyphosate in several processed foods. The results have not been released, but could be made public later this year or in early 2019.

While the EPA continues to deny that glyphosate may increase the risk of cancer, court documents introduced in the recent California trial (the same one that awarded a $289 million judgement against Monsanto) showed how the agency and Monsanto worked together to promote the claim that the chemical is safe.  Just to make sure you didn’t miss this part:  Monsanto and the agency mandated to monitor and regulate the use of its products worked together to conclude that the chemical Monsanto creates and sells is safe!

We find this extremely troubling because there is a clear conflict of interest with Monsanto benefiting from both the sale of the genetically modified seeds it creates to withstand herbicide use, while also profiting from selling its product Roundup (containing glyphosate) as the only viable herbicide option.  All while Monsanto heavily lobbies and pressures the EPA to claim that the use of glyphosate is perfectly safe.

EWG has been urging the EPA to review all evidence linking glyphosate to increased cancer risk and other adverse health effects in human and animal studies.  The EPA is yet to act.

Oatmeal and other oat-based foods are a healthy source of complex carbs, fiber and nutrients.  Oat consumption is widely known to reduce cholesterol and decrease cardiovascular risk.  At John’s Killer Protein®, we believe consumers should not have to wonder whether eating these heathy foods will also expose them to herbicide, pesticide or other harmful chemicals.  That’s why we independently test our ingredients and only use certified GMO Free and Certified Organic Oats in our protein blends.

Bottom line is that glyphosate does not belong in our food supply.  Instead of debating what levels are considered safe, what some arbitrary “part-per-billion” threshold should be considered safe or not, let’s focus on alternative farming methods that ensure we don’t poison our own food supply.

We believe The EPA should function as the independent oversight agency it is mandated to be, and limit (if not completely prohibit) the use of glyphosate on food crops, including pre-harvest application.

We encourage you to reach out to the Companies and brands you purchase.  Whether it’s Quaker®, General Mills®, Bob’s Red Mill® or any other company.  Call them, e-mail them.  ask for complete transparency about what is and isn’t in the food they make and sell to you.

We’ve always believed in complete transparency, and that’s been at the root of our brand’s success.  The John’s Killer Protein®  “Beyond The Label” initiative is our attempt to share with you pertinent information about the foods we make and the foods you purchase from us.  You deserve nothing less!

If you have any questions or concerns about the products we make, reach out and ask.  You can contact us Here or e-mail us at [email protected]

9 thoughts on “DOES YOUR OATMEAL HAVE GLYPHOSATE”